When the proof search fails we have a sequent to which no further rules can be applied. We call the resulting sequents maximal sequents.

Definition: We say that a set Γ is maximal when

So there is a world for the maximal set Φ itself, and for all [Δ]i in Φ there is world sΔ that is accessible from sΦ by agent i. We then choose the valuation such that precisely those propositions are true that occur negatively in the set.

The next step in the completeness proof is

The proof proceeds by induction over the structure of the formula χ and the relations Ri.

Assume the induction hypothesis; that given a signed formula χ± the truth lemma holds for

Then to show that the truth lemma holds for χ± there is a case to consider for each type of signed formula:

So by induction the truth lemma holds for all χ± ∈ Γ for all Γ with sG ∈ SΦ.

One final piece of the completeness puzzle remains. It must be possible to construct either a maximal set or a valid derivation for all formulas.

This derivation is constructed with a proof search, as described previously. In the proof search rules are applied bottom up for as long as possible.

All logical rules, when used from the bottom to the top, either

In the first two cases only smaller things are added. Formulas of the third type can only be used a finite number of times, since

The input formula is finite, so eventually no more subformulas can be added. Therefore, the proof search always terminates.

We apply the above proof search algorithm to a formula φ+ that is not valid (⊭ φ+). Because of soundness the proof search must fail, so we end up with a maximal set Φ. From this set a counter model MΦ is then generated.

With the copying meta-rule we have ensured that φ+ ∈ Φ. By the truth lemma then M,sΓ ⊭ ψ. We have found our counter model.

Counter models are not just interesting from a theoretical point of view, they can also be interesting to the user of a theorem prover. For example, when entering a → K1 K1 a the (S5) proof search will terminate with the maximal set

The model generated from this set will contain three worlds, one for Φ, one for [K1 a+]1 and one for [a+]1. To ensure that what we end up with is an S5 model reflexive, transitive and symmetric arrows are added. Graphically the resulting model will look like: 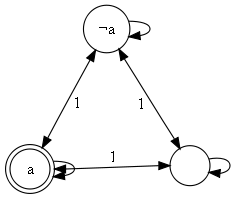 Clearly the world sK1 a+ in the bottom right is superfluous and can be removed. The program therefore contains a very simple algorithm to minimize models:

After minimizing the model becomes simply 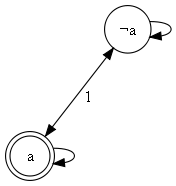